We shall be joining the Hen Harrier Day at RSPB Arne on 7 August 2016, with Iolo Williams as guest speaker, with more speakers to be confirmed.  Lots of fantastic raffle prizes. Look forward to seeing you there. 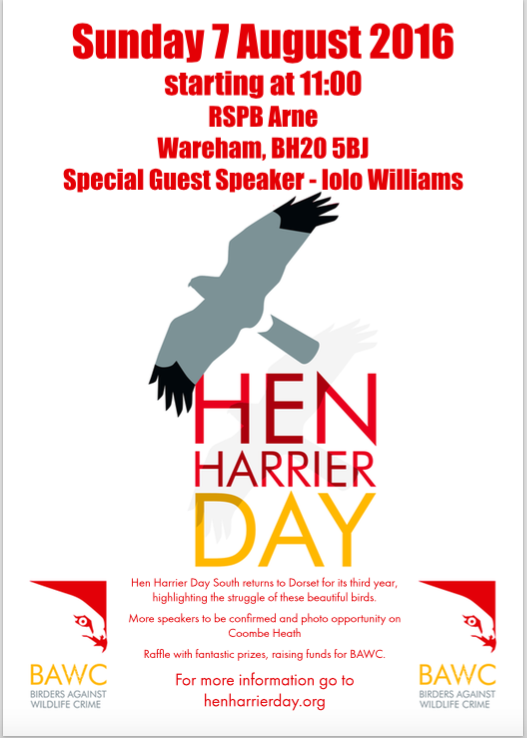 At last summer seems to have arrived and in was on an already hot sticky morning when we met our Sunday monthly group for a walk over Hartland Moor.  Walking along the tramway we first encountered Greenfinch singing and also on the path, a Blue Tit calling and the first of many Stonechats and Meadow Pipits.  A Dartford Warbler was heard singing on the other side of the hedge-line, we stopped trying to peer through then the sound got much closer and a beautiful male sat up on the top of the bush then went into a display flight, then disappeared!  Swallows twittered as they flew low over our heads.

Gatekeeper butterflies were enjoying the sunshine and definitely the most numerous on the wing today.  Someone's sharp eyes found a Common Footman moth hiding under a leaf and was a little surprising.  Nick wandered down to a pond and boggy area hoping for dragonflies but only found lots of  Common Damselflies.  Small Heath butterflies flitted about on the path, trying to find a sunny spot  without being disturbed by us and on the hedges Small  and Large Skippers and Ringlets.  It was nice to see the Ragwort was covered in Cinnabar moth caterpillars, now well grown in looking bright in gold and black stripes.
A Skylark sang and looking up for this lovely songster and then we noticed a soaring Buzzard to the left of the hill, but others looking right had a falcon.  Switching across and looking through the 'scope Nick was able to confirm it was a Hobby, not only that there were three of them!  The only shame was that they didn't come closer.   As we reached the end of the tramway where we were turning off we had Goldfinches and Linnets.  In the field a Green Woodpecker flew up and disappeared into the wood and a female Pheasant dashed off in the other direction.

Just along we had a Silver-studded Blue butterfly and with so much heather coming into flower I was surprised not to see more on the wing.  A few female Keeled Skimmer Dragonfly were warming themselves on the bracken.  We were then lucky to find a rather unusual Blue-tail Damselfly, an immature female of the species ischnura elegans rufescens.

A Common Lizard ran across my path but Fran was quick to see him in the heather, when we noticed the large green caterpillar of Emperor Moth.  Then our first Grayling, another species found on the heath.  A Kestrel came over as we approached the road and heard Blackcap and Chiffchaff singing, then an adult Raven with a noisy juvenile, the joys of parenthood.  We also added Marbled White and Small Copper to our butterfly list and a couple of moths with Silver Y and 6-spot Burnet.

As we said goodbye to everyone and turning the car round two Wood Larks flew across, a wonderful way to finish a very warm but excellent walk.

A bit of the Mediterranean in Somerset

Our group met at the Ham Wall RSPB reserve car park bright and early yesterday (Sunday 3rd July) and the sun was shining and the birds singing.  Just in the car park we had some great birds with Song Thrush, Blackcap, Chaffinch, Chiffchaff, Goldfinch, Reed Bunting and Whitethroat.  We can also add in a Great White Egret, Cormorant and Grey Heron flying over and a Kestrel landed on a telephone pole in the car park, a brilliant start.

From the main footpath looking down the canal and embankment were Moorhen, Coot, Mute Swans and Mallard.  An adult male Marsh Harrier came across and landed on the newly mown embankment, he didn't linger long before taking off briefly quartering the next field then landing low on a dead tree.  A female then appeared and was quartering in the same area.

The trees and bushes next to us seemed to come alive with several small birds with a male Bullfinch, Willow Warbler and Wren.  Our attention though was with a family of Garden Warblers, with one of the juveniles sat out on an open branch waiting for its attentive parents to feed it, a real delight to stand and watch.  Cetti's Warbler gave out its strident loud song, the first of many of our walk and sometimes we caught a glimpse of this shy bird.
From the first platform and down to theTor View Hide, stopping at the screens as we went, looking over the reedbeds and open pools. Hearing the "whinnying" calls of the Little Grebes and eventually one did pop up giving a clear view, but the Great Crested Grebes were much more showy with several pairs.  Some were still sitting on nests, some were carried their stripy young on their backs still while others had well grown young.  Though dominated by Mallard we also had Gadwall, Shoveler and the Tufted Ducks had very small fluffy young.  Reed Warblers in the reeds and on top male Reed Buntings singing trying "out sing" each other.  At the Tor View Hide a Bittern sat out on the edge of the reeds flying before we could get the scope on it but we had many flights views during the day.  Back on the main path we stopped and listened to a distant Cuckoo, we were surprised to add to our list today.
Deciding to go on to the Avalon Hide we walked on, it was not all birds with Blue-tailed Damselflies, Variable Damselfly, Common Darter, Black-tailed Skimmer, Brown Hawker and Hairy Dragonfly.  Butterflies included Small White, Red Admiral and Green-veined White and the gorgeous Scarlet Tiger a day flying moth.  From the Avalon Hide more views of Marsh Harriers including a couple of young ones, Bittern and a pair of Mute Swans with six young cygnets and a single Pochard.
From the Lower Platform we had Lapwings and Black-tailed Godwits in their splendid brick red summer plumage.  I caught sight of a dark wing going down behind a bush by the pools edge, I hoped it was one of the two Glossy Ibis that had been seen here earlier.  Thankfully it didn't take long before one walked out followed by the second and through the 'scope we had good views.
Over our break for lunch around the car park area with it's wildflower areas and the ponds we had Ringlet, Large Skipper and Speckled Wood butterflies and Red-eyed Damselfly and 4-Spot Chaser dragonfly.  Swallows flew through and a Great White Egret came really close as it flew by.  We then spent some time on Shapwick Heath, it was now really hot and the birds became very quiet but we did add Long-tailed Tit, Swift, Greylag Geese and Jay, just two were quick enough to see the Hobby as it dashed through!
Posted by Nick + Jackie Hull at 20:58 No comments: