Bank Holiday Monday and the sun was shining excellent for our first outing to Bentley Wood this year.  Plenty of Blackcaps, Chiffchaffs and Goldcrest singing as we walked to the Eastern clearing and almost immediately we had a Pearl-bordered Fritillary.   We were lucky to see quite a few and as we searched for a Duke of Burgundy we had Tree Pipit, Marsh Tit and Garden Warbler.   However the Duke avoided us, though we did see Brimstone, Orange Tip, Peacock and Speckled Wood.  A high flying Sable & Argent moth flew by and after a bit of a chase it did finally settle for a quick photo before it was off again.  We also noted Bee Fly, Early Bumblebee Bombus pratorum, Green Tiger Beetle and it was nice to see some Water Avens Geum rivale in flower. 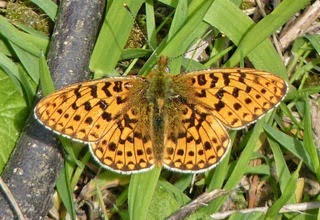 Our next stop was on Salisbury Plain, as it was early afternoon we didn't expect to much, however Skylark and Meadow Pipits were displaying, Corn Buntings, Yellowhammers and Whitethroats singing.  Our highlight was definitely a splendid male Whinchat sat up a little mound, occasionally running down to pick up a morsel and then back up again.  Using the car as a hide meant we were able to be close without disturbing him at all, until someone came in front of us and took 2 excited dogs for a walk!  We finished with a very distant Stone Curlew, so a brilliant day.

Actually our day hadn't finished, hearing that a Spotted Crake had been heard in Poole Harbour we just had to go back out again in the evening.  We started at Middlebere whilst still light and listened to Dartford Warbler and Song Thrush, while a fox stood on the road watching us with interest.  As darkness fell a Snipe started drumming, such a wonderful sound and though we could hear him we couldn't see him.   On to Ridge to listen for the Spotted Crake, we were lucky almost straight away thankfully as it then started raining and became far too heavy to listen any more.

Longham Lakes near Ferndown our venue for the Tuesday group, walking round the South Lake.  Lots of Swifts hawking over the lake with a few Swallows and House Martin.  Whitethroats were in good voice in the hedgerows and Reed Buntings in good numbers as usual.  Along the causeway in a small reed bed we had 3 Reed Warblers and further on another couple of males singing.  A Cetti's Warbler gave it's loud short song and in the distance a Cuckoo.

This time it was our monthly Wednesday group meeting at Bolderwood and we started on a high.  Fran pointed our Redstart on the other side of the green, we were then treated to super views of a pair and Jess had a pair of Bullfinch nearby.  Then Joe bought our attention to our raptor and Nick quickly called "Goshawk", we all managed to get a good view of it as it flew low overhead.  Through the wood we had songs of both Goldcrest and Firecrest but views were very difficult to obtain.   A Marsh Tit did prove more confiding but it was the Wood Warbler that stole the show.  We heard the Wood Warbler singing and were able to get close enough to watch it giving that little "shimmy" as it poured his heart and soul into his song.  Such a beautiful warbler and a distinctive song.