As the La Brenne was so wildlife packed I'll report on our wildlife highlights over a few blogs as it would be to long to summaries everthing in just one.

It was earlier in the year when Jackie and I met Nigel Spring and during our conversion he mentioned that he was planning a trip to the La Brenne which would be a general nature trip.  This appealed to Jackie and I myself and we asked him to keep us informed as we would be interested.  In due course we found ourselves on the ferry from Portsmouth to Caen and then on a long drive down through the centre of France.  We stopped for lunch at friends of Nigel, Nick and Julie here we had a chance to look around their property which abounded with wildlife.
In their wood we had our first orchid for the trip with Greater Twayblade and we had our first butterflies here with Heath Fritillary, Small Heath, Small and Large Whites and a single Swallowtail.
We also heard Black Woodpecker call from the wood and watched Great Spotted Woodpecker coming to their feeding station.  They had an amazing amounts of bees coming to the flowers in the garden many were the Common Carder.  Though one stood out from the rest, the Violet Carpenter Bee which would buzz by you and because of its large size would almost make you jump.
Our visit here was brief and far too short but we had continue our journey south and en-route we occupied ourselves in spotting and identifying any wildlife.  Whilst traveling the motorway we were able to pick out Yellowhammers and Cirl Buntings many corvids and the odd Common Buzzard and Kestrel etc.

After what seemed a pretty long day we arrived at out hotel in Mézières-en-Brenne and not surprisingly it was very typically rural French building with plenty of character and as it turned out very comfortable rooms, good food and nice staff just what you want when you go on holiday. 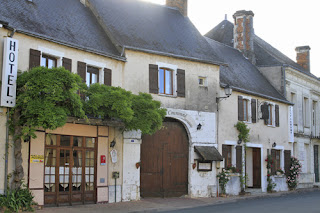 Our stay lasted a week and we would go out for an early walk at around 06:30hrs and arrive back at the hotel for breakfast around 08:30hrs then start out again around 10:00hrs after Kathy and Nigel had provisioned food for our alfresco lunch, which due to the weather we were able to do every day.

Like all wildlife holidays you have your highlights though there were too many to write about all of them here.  Jackie and I had a few species that we wanted a chance see, a few of them we had seen before but some years ago and others would be new for us in France.  A species that we had seen before but not for a few year was Whiskered Tern and the La Brenne is probably one of the best places certainly in France to find them.  They like to nest of mature lilly pads and as there are around two thousand ponds and lakes in La Brenne and most have lillies in them so there is a good number of breeding sites available.  Over the week we had many opportunities to see and photograph this lovely tern.
There were a few species of Butterfly that Jackie and I wanted to catch up with and one of them, the Woodland Brown, has always been classed as scarce and local in the La Brenne area but Nigel knew a couple of locations where he felt we stood a good chance of finding them.  As it turned out he was correct but we also realised that this particular butterfly has had an increase over recent years and is fairly common and as we hit the peak period for emerging and we found them in many places.
Another butterfly that was really nice to find was Spotted Fritillary which we found whilst out searching for orchids one day.  This is a superbly marked fritillary which gave great problems for us to get an identification as it was a very hot day and it insisted on keeping its wings open on landing and we needed to see the underwing to confirm our id.
Another butterfly which we came across in the same location was Marbled Fritillary, equally as beautiful as the spotted, though we did find this species in other localities during our break.
This is end of the first instalment of our trip and time to sort through a few more photographs before we share with you a little more of the La Brenne experience.
Posted by Nick + Jackie Hull at 19:43