In Search of Island Birds Part 2

After our visit to St. Kilda our next destination was to be Stornaway on the Isle of Lewis.  Very little birding here for us though we did have Arctic and Common Terns in the harbour and Black Guillemots.  We disembarked and had a walk through the town and along the river to cross at the bridge making our way to Lews Castle,  here we found a Grey Heron fishing in the shallow river.
A walk through the wood to Lews Castle.
Back In 1844, the MacKenzies sold Stornoway, and the Isle of Lewis as a whole, to
In the museum here we were able to see examples of the 12th century Lewis Chessman. Chess is a very old game. It originated in the Islamic world and by the medieval period its popularity had spread across Europe. It became an important part of elite medieval society, a way of practising and demonstrating skill and strategy in a war-like setting. Many of the medieval chess pieces are familiar to those who play the game today.
Most of the Lewis chess pieces are made from Walrus ivory. This was probably obtained in Greenland and traded back to Norway. Two of the pieces in the collection (and three British Museum pieces) are different, carved from sperm-whale teeth.
I also recorded a first here in the form of a beetle which is most probably Phophuga atrata (Silpha atrata) Sometimes this species is called the Black Snail Beetle as it preys on snails.
As we walked back through the town we saw various pieces commemorative statues and signs about the local history such as:-

As you can see the weather wasn't that kind to us though the complementary waterproofs, though a bit bright, worked very well. We headed back to the ship for lunch and rest to be ready for the evening sail and seawatch off the bow if the rain stopped.
I did manage a couple of shots from the ship of birds in the harbour.

So it was goodbye Stornaway and Lewis and next morning hello Islay, here we decided to do our own thing and found an RSPB reserve that was around 25 minutes from the Port.   We rang around several taxi's once we were ashore and they were all busy then on the quay info sign there was Hughie's Taxi so gave him a ring and he told us he would be around 15 minutes and would pick us up by the cenotaph.
Well 20 minutes later we were on our way to Oa RSPB Reserve it was a very scenic route and we saw a few species on route, Hooded Crow, Buzzard, Whinchat, Meadow Pipit.  When we arrived we found the access road to the reserve was being resurfaced so we had a bit of a walk to reach the reserve proper.  Oa is a working farm as well as a nature reserve and we met a few of the locals and I had to include one shot here of one of them just for Jackie.
There is also a monument here to commemorate the loss of 700 American lives in two WW1 troopship disasters.
It was too far for Jackie to walk around the whole trail but we managed to get to look over the coast to attempt to see the Golden Eagles that reside in the area but it really wasn't ideal weather for raptors. Skylark were everywhere, Lesser Black-backed Gull were resting in the shelter of one of the small hillocks and we had Wheatear, Stonechat and Whinchat in the scrub and on the fences.
After around 2 hours we made our way back through the roadworks to the cross roads where we waited for Hughie to pick us up.  On route we heard Snipe calling and found Northern Marsh Orchid
Hughie arrived and we started our return to the port but en-route we had a Hen Harrier fly across the road and dive into the long grass and Hughie pulled over for us to have a good look at this stunning bird, just a little further on a Merlin flew across the front of the car.  We were probably half way back and Hughie asks "have you time" yes we've have plenty "Ok I'll take you up the valley where I live show you a bit more don't worry won't cost you anymore".  Off we went, he showed us his house and small holding and where the best fields for Corncrake were and we came across a flock of Greylag and he told us they used to be winter visitors but have begun to stay and breed in recent years.  Eventually we arrived back at Port Ellen and said goodbye to Hughie a real top taxi driver!  Back on the the rib and back to the MS Maud, we did not have a big list but had some quality and saw a small part of the beautiful Island of Islay. Next morning we would be entering Douglas on the Isle of Man passing this refuge tower built by
Sir William Hillary, 1st Baronet best known as the man that started the RNLI.
The Isle of Man didn't give us much in the way of birds, we were more like typical tourists. We walked from the port to the railway station to take the steam train to Port Erin and back.
It was an interesting ride though probably not the most scenic of train rides but when we arrived at Port Erin we were starting to have a look around the town when the heavens decided to open up and we dashed back to the cafe at the station and drinks all round.  Time was moving on soon time to take the train back to Douglas and walk back to the port and the The Maud.  Later we sailed around past the Calf of Man where the Manx Shearwater is supposed to have been originally named on our way towards our next location Waterford in Ireland. 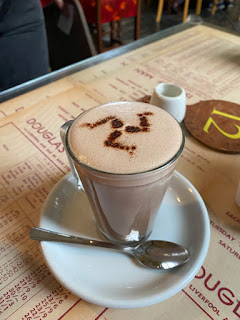