July, When There Should Be More

July I feel is a strange month, you always feel that there should be more birds to see and catch-up on.  What is usual is some breeding birds are going for their second brood, some are finishing and thinking of leaving, then towards the end of the month others will be returning and migration starts all over again.  For us birders we tend to go off and look at butterflies, dragonflies and do a little bit more moth trapping.  I certainly do all of these, though always keeping an eye out for the birds to, as we walk around doing our surveys of some of Isle of Purbeck rarest invertebrates.
On the bird front we broke the 200 species mark, though we could have done a little better if we had twitched one or two species earlier in the year, but we still have the autumn to go and I'm sure a few species will be added between now and the end of the year.  Our bird highlights of the month must go to a Honey Buzzard that flew past us in the New Forest on the 6th, White-tailed Eagle at Arne on the 20th and a Great White Egret on Lytchett Fields on the 26th July.
Our 10km challenge is now on 162 we are a little behind what we hoped but we have been away on holiday and been looking for other wildlife. We will get started again trying to catchup on a few that we missed in the spring and hopefully add a few of the winter species that we haven't listed in the latter period of the year.
On the 2nd July I caught a Striped Hawk-moth in the the trap and what was nice it was the last moth found in the trap as it was on the inside of the trap cover.  This was a first for me one I've always hoped to catch one day. They are a stunning looking moth as you can see in the shot below.
Also the hot sunny weather has brought other migrant moths to our shore though for me other than the Striped Hawk-moth the only other that has really stood out from the crowd has been the Jersey Tigers which I've caught a few of this year.  Four Spotted Footman can also be a migrant though I think may also breed here now and another which I've been catching in good numbers has been Rush veneer a paralid micro moth though intersting isn't what you would say a stunner. 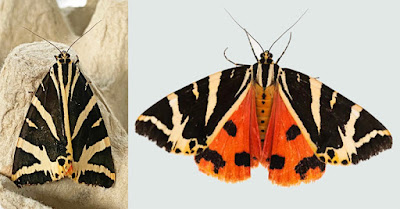 I've also been catching a small grass moth called Oncocera semirubella this is a moth I catch on occasions and is of National importance.  Again this is a fairly small moth but with a touch of colour.
Our granddaughter has joined me in the Arne reptile survey team and has been out helping us.  She has seen her first, second, third and fourth Smooth Snake though the Grass Snake moved so quickly she only saw the tail as it disappearing into the heather.
As we were finishing one of our reptile surveys we came across a Hornet Robberfly they are a noteable species which are declining in many places but can still be found around the Purbeck Heaths.  There main prey is grasshoppers and they lay their eggs in animal dung so now that there are cattle and horses grazing on the open heath it should help this species recover here.
Jackie and I went for a walk along the Hartland Moor Plateway to see if we could find and count the Purbeck Mason Wasps but after a successful season last year it appears this year has been very poor and we only found a single female. On our return to the car we had our first Gatekeeper which I took a couple of photograph off.  When I was editing the shots at home I noticed the small beetle and recognised it as one I had seen before there in 2019 after a quick check and a search for the previous photograph I was able to confirm it was the same species Calomicrus circumfusus and as it turns out it is also a Nationally important species and very notable.
Another species which I help survey is the Heath Tiger Beetle this is another Nationally important species which over the last few years some active management has gone into trying to create the right habitat to preserve and increase their numbers. Unfortunately I couldn't go out on the survey day with everyone else, so Jackie joined me on a warming morning to walk over part of the survey area.  We walked around a 100m up and back over the area I usually find them and counted 32 individual my highest ever count. Talking to a friend a few days later who went on the survey day they had 49 the best counts of the last few years so hopefully this trend will continue for this superb predatory beetle.
What is also nice Terry one of my co-surveyors and myself now think we can differentiate between the two sexes. It appears that the white tusk like mandible sides are longer in the male than in females.  So hopefully in the future we will be able to separate and have a better idea of numbers of each sex that makes up the population at each location we survey.
I think that covers the highlight of for July wildlife, I wonder what August will bring.
Posted by Nick + Jackie Hull at 22:55