Though at Two Owls we concentrate on birds we have a much more general interest in all wildlife and will not pass something by without pointing it out if we know what it is, if we don't we try to get an identification.  Over the last few weeks we have visited a number of different locations and we have seen a variety of different wildlife some of the highlights I managed to photograph so we thought we'd post a few of them here.

From our visit to Bentley Wood, this was a Butterfly walk though as it turned out not the best day as the weather was cool and overcast. During a few brief sunny periods we did catch-up with a few of the species we went to see.
We came across several beetle species as we searched for roosting butterflies, the Malachite was a new species for us as was the Alder Leaf Beetle.  The latter a slightly more interesting species as it was thought to have become extinct in Britain until it was discovered in 2004 in Manchester, since then it has been found in Southampton and seems to be spreading.
We also had a Black Oil Beetle a amazing looking beetle, in fact two were found.

On our walk at Middlebere and Hartland Moor we recorded our first Small Copper and Small Heath butterflies of the year.
Another find from the eagle-eyed in our group was this Wasp Beetle resting on a leaf.
Yesterday, 23 May, our Tuesday group visited Martin Down, not only good birds to be seen but we saw a good number of butterflies with  Common, Small and Adonis Blues, Dingy and Grizzled Skipper to mention a few.  Below are two photos taken by Jackie of Adonis Blue, one landed on my hand and shows how tiny they are. 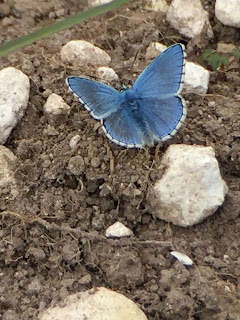 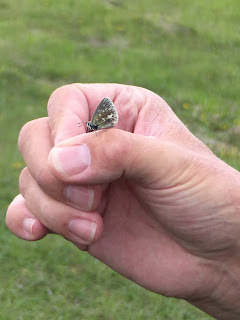 But again beetles seemed to get noticed.  We started with a Bloody-nosed Beetle and then found many Garden Chafers and particularly on many of the yellow flowers we found the metallic green beetle Cryptocephalus aureolas