Jackie and I have had a pretty good start to May birding, beginning with Portland Bill on the 1st May.  We decided as we hadn't been seawtaching for some time and there had been some skua movement in the last couple of days of April.  Also there had been a Eastern Subalpine Warbler at Cheyne Weares so we thought we'd just stop and check if it was still around, before heading to the Bill for a seawatch.  So at eight o'clock we were looking over the scrub by the Cheyne Weares car park in a light drizzle thinking there is no way that the bird was going to show in such weather.  But after about twenty minutes or so Jackie picked it up in a elder bush and we watched it for quite awhile and I took some memory shots, none of which are very good. 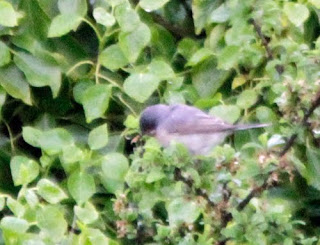 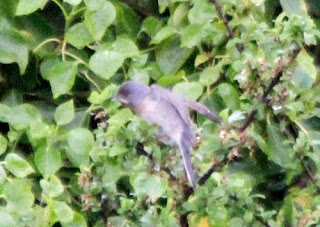 We saw it later after the rain stopped in bright sunlight but it didn't come close enough for a half decent shot.  So off to the Bill we went and on arrival we decided we'd give seawtaching an hour as conditions didn't appear to be right for the best seawatching.  Immediately it was obvious there were many Gannets passing the odd Fulmar, the usual gulls and a Shag or two.  Then the wind swung around the sky cleared but still nothing then a flight of thirty Common Scoter passed.  I checked the time we'd been there for fifty minutes and then things went a little mad, two large dark brown birds with white wing flashes came by Great Skua's and not far out giving excellent views as they passed.  Thinking we should go and renew the parking ticket whenthere were four more skuas a little further there was no doubt two dark phase and two pale phase and with spoon shaped central tail feathers - four stunning Pomarine Skuas. They were followed by three Arctic Skua and amazing as that was, two more Bonxie came past and then Jackie picked out a Puffin, leaving two minutes to get back to the car before the parking ticket ran out.

The shot below was not the Portland birds but was taken from the Normandy coast a few years ago.
After what was probably about the best eight minutes of seawtaching I've had in recent years we decided to call it a day and headed home happy.

Next day popped back to Longham as a friend wanted to see the Bonaparte's Gull but it wasn't to be seen and we we told it seems to turn up later in the day, so we headed off into the New Forest to an area we haven't visited for a while.  It was alive with Blackbirds many feeding young, we came a cross Tree Pipit and several Firecrests, Redstarts and Cuckoo.  But possibly the best was a beetle, in fact a very glossy dung beetle a Heath Dumble Dor Trypocopris pyrenaeus which is quite a rare species found mainly in Dorset, Surrey and the New Forest.

Later we revisited Longham and saw the Bonaparte's and ended the second day of May happy.

On the 3rd May we met our monthly Wednesday group at Blashford Lakes at the Tern Hide and started almost immediately on getting out of our cars with Lapwings chasing off a Crow and a singing Garden Warbler from the brambles plus Swifts overhead.  From the hide we had the usual Black-headed Gulls, Coot, Tufted Duck and Mallard, along the foreshore there were Redshank and Little Ringed Plover.  Further out there were Greylag, Canada and Egyptian Geese and at least a dozen Common Tern flying back and forth feeding over the lake.

We moved on around to the Goosander hide checking off a number of the common woodland species as  we went. As we turned off the main path we disturbed a Kingfisher on the edge of the balancing pond which was a nice addition to our day list.  Just before the hide we had a very showy Garden Warbler singing  and giving everyone good views as well as a good listen to its varied song.
From the Goosander hide we were able to add Great Crested Grebe, a duck Mallard with her new ducklings a distant Buzzard and more geese and a few Mediterranean Gulls on the Island. Then the Kingfisher flew past and perched up on a branch over the water to our left just a little to far for a good photograph but it gave excellent scope views.
Walking on around to the Lapwing hide we had good views of a Cuckoo and a good number of Reed Warblers and a handful of Reed Bunting and more Garden Warblers.  In fact the latter was probably the most heard bird on our walk, as someone said on the day "it seems to be the Mecca for Garden Warblers here" certainly the habitat here suits them well.  On the lake before the hide we had lovely view of a summer plumaged Little Grebe and Swallows swooping low over the water.  From the Lapwing hide we had Gadwall and a super pair of Lesser Black-backed Gull resting out front, Jackie called Wigeon and somewhat surprised to still see any present there were nine on the gravel spit and a little later they took off circling the lake.

On the 7th May we were back with a group in the New Forest at Pig Bush, the heath bog and woodland gave us a good selection of the forest birds and new arrived migrants.  We quickly ticked off Chiffchaff, Willow Warbler and Redstart, then our first Cuckoo.  Crossing the heath to the bog area Stonechats and Meadow Pipits outnumbered everything else, we had a Dartford Warbler singing but we were unable to find it in the thick heather.  In the bog we had good views of a Garden Warbler in a small stand of willows and Lapwing were very busy keeping away the crows and Jackdaws from nest and young.  But the highlight of the morning had to be the Snipe first heard making its characteristic yapping call from somewhere in the bog.  Later we had two birds over the same area drumming which is just a wonderful sound and a sound that is becoming much rarer in the last ten years.
Shortly after we had our first Spotted Flycatcher of the year and added Treecreeper quickly followed by a pair of Redstart.  Ben who lived in the forest said he had Woodlark in that area as well and only a minute or two later Jackie picked up one singing albeit a little distant.  We continued on checking off species as we went and we checked the Treecreepers nest that I found a couple weeks before, they were still present so things were looking positive for a successful outcome even though they were very close to the path.  A little further on Pauline called "what's that bird ahead on the path", the first bird that most of us saw was a female Chaffinch, then I became aware of another bird and quickly realised it was a Woodlark and in fact there were two, we all had brief but good views before they became aware that we were watching them and moved out of sight, ending an excellent mornings walk.

On the way home from Pig Bush a birding friend Olly tweeted that the Black Terns was still present at Longham lakes so as we were just passing through West Parley we thought it a timely report and we stopped in to see if we could see them.  On arrival we were walking around the north lake and ticked off the 1st/sum Bonaparte's Gull yet again noticing that its head seemed a little darker than a few days earlier.  We then met Olly as he was just leaving and he pointed out that the terns were at the far end of the south lake.  Indeed they were all three were sat of a buoy out in the middle of the lake, all looking superb in full summer plumage a perfect way to end the first seven days of May.